Perched on one of the red stools inside the Bánh Mì Shop (567 Melville Avenue, University City), I spot several people peering into the windows, looking at the newest addition to the Delmar Loop.

Some passersby point at the shop’s sign, scrawled in bold black letters next to the red stool logo, and keep walking. Others step through the doors, welcomed by hip-hop music and owner Jimmy Trinh, who smiles and greets them as he sits across from me.

Trinh quietly opened the Vietnamese sandwich restaurant on February 25. He removed the paper covering the windows and surprised the neighborhood with the new spot, which is tucked into the row of brick buildings on Melville Avenue. He decided not to promote the spot before opening as he didn’t want to be overwhelmed with a line out of the door on day one.

“I’m either the smartest person or the dumbest,” Trinh says with a smile. “[It was] like shocking all of them or do a bunch of promotion before I open and get crushed. You only have one first impression; who doesn’t want a line out their door? If you can handle it, it’s one thing, but if you can’t, that’s another. They won’t come back. You can’t go out there and chase them down and say ‘Hey we fixed it!’ It’s much harder. Keeping it low-key was a different choice, but we chose wisely.”

During the Bánh Mì Shop’s first weekend of business, the shop sold out and had to close its doors early. Selling out gave Trinh and his team time to regroup and prep for the upcoming week.

“It sucks closing the first week, but it felt good,” Trinh says. “It definitely solidified that we are doing something right to be able to say we sold out.”

Trinh hops off one of the red stools lining the front window and makes his way over to two customers eating bánh mì sandwiches and asks how the food tastes. One of them responds that he can taste the love that was put into the food. Trinh laughs and thanks him. He walks back over to the front window, looks at me and says, “Did you hear that? He tasted the TLC.” 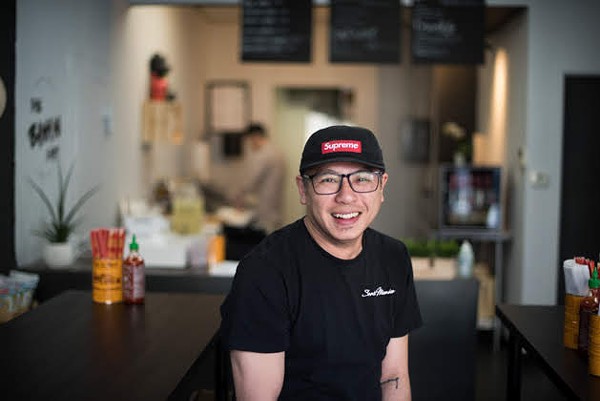 Bánh mì is a Vietnamese sandwich that is traditionally made with meat (often pork belly or pork sausage), cilantro, cucumber, pickled carrots and pickled daikon as well as French condiments such as pâté or mayonnaise between a halved French baguette.

At Trinh’s shop, the sandwiches are made with ingredients varying from curry chicken to barbecue pork and lemongrass chicken, as well as pickled daikon, carrots, cilantro, jalapeños, cucumber and housemade aioli.

“Being a kid with immigrant parents growing up in America, you eat a lot of sandwiches,” Trinh says. “My parents worked a lot, so I’ve always eaten a lot of sandwiches. Growing up, it’s like ‘Ah, I can’t bring a bánh mì sandwich to school.’ You want to bring ham and cheese like all the other kids. Then, I got to the age where it was like ‘This is so good,’ and it’s like getting back to your roots.”

Photos of Trinh’s dad performing motorcycle stunts from his time in the circus hang on the wall. The red stools that sit at the front of the store symbolize Vietnamese street food, Trinh says. Graffiti on the wall is currently being painted by artist Bradley Pipkin who is known as Plastic.

While bánh mì is the main attraction at the shop, spring rolls and noodle bowls are also featured on the menu. I tried the lemongrass chicken noodle bowl and the flavors exploded bite after bite. The curry chicken bánh mì, meanwhile, packs a bit of heat but is mellowed by the cilantro and pickled veggies. Wash it all down with the lychee lemonade, a perfect blend of sour and sweet. The restaurant also serves a twist on Vietnamese iced coffee.

Moving forward, Trinh hopes to keep the pace the store has set so far.

“For now, we remain low-key: There is no right time [to say in] full force, ‘Hey I’m here,'” Trinh says. “Doing this, seeing the outcome, it’s almost told us maybe we don’t need [to advertise], there’s enough buzz going around town and we feel like people coming in and saying ‘Hey, so and so told me about this place,’ that’s the best advertising we could ask for is word of mouth.” 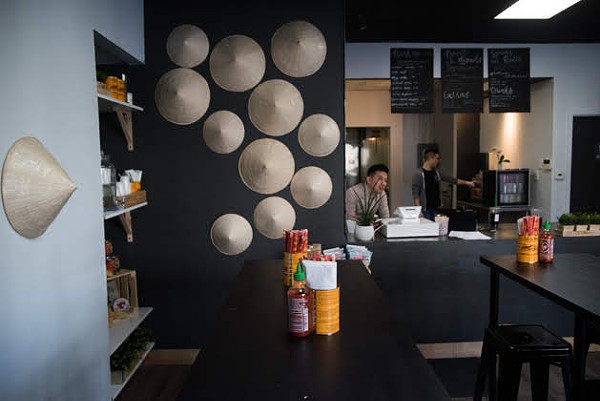 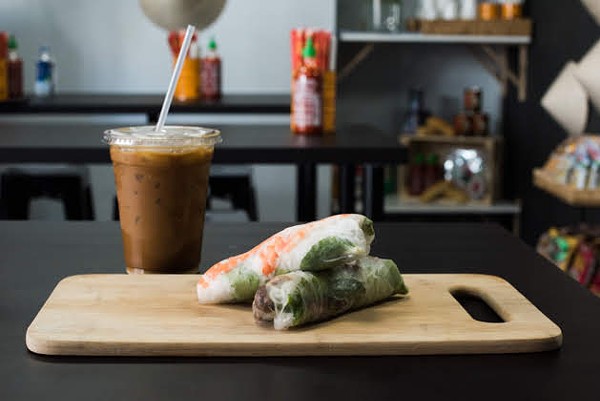 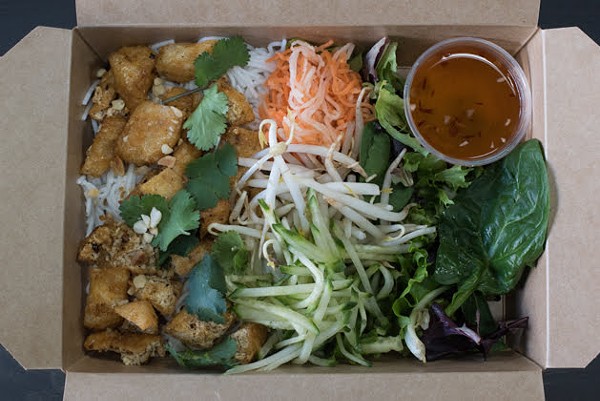 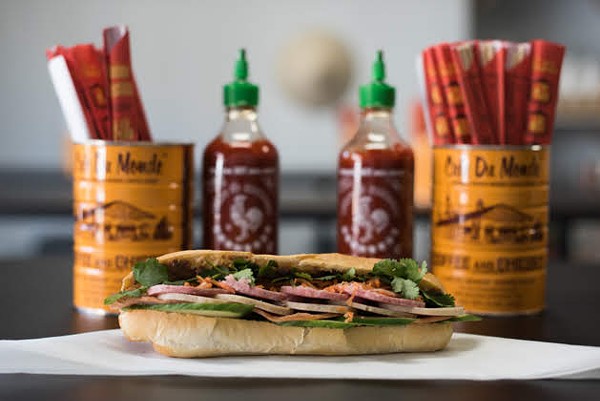 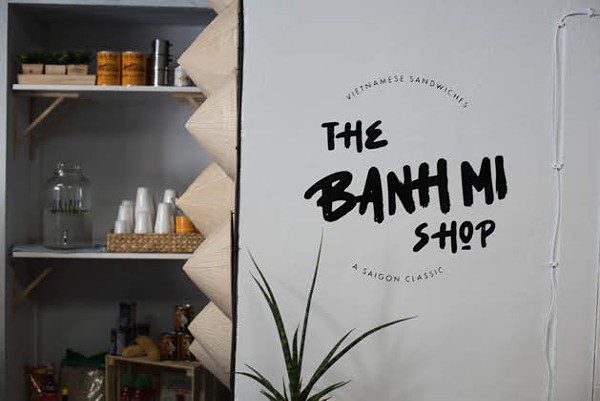 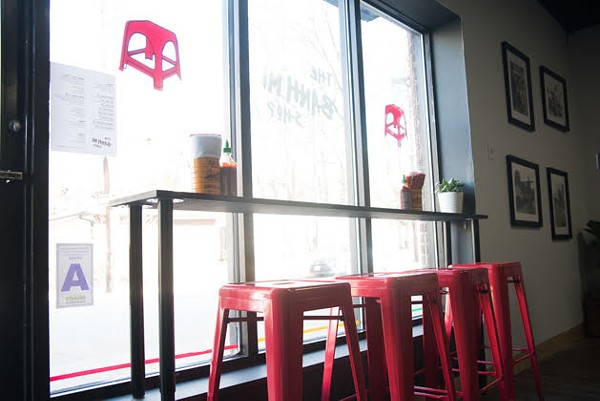 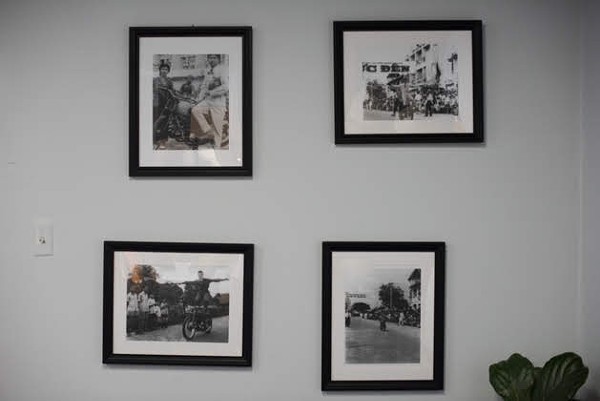 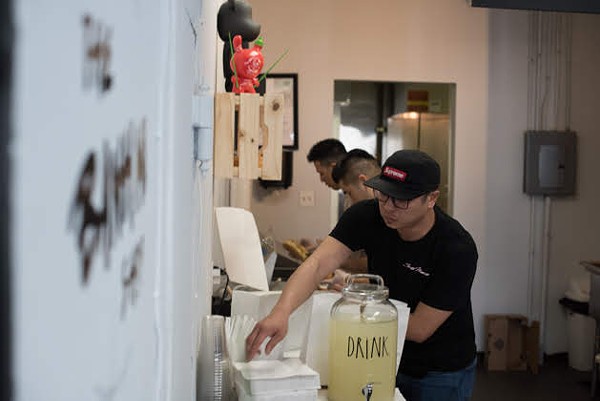 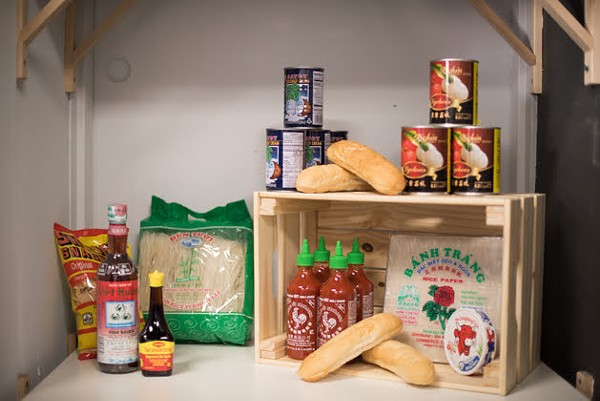 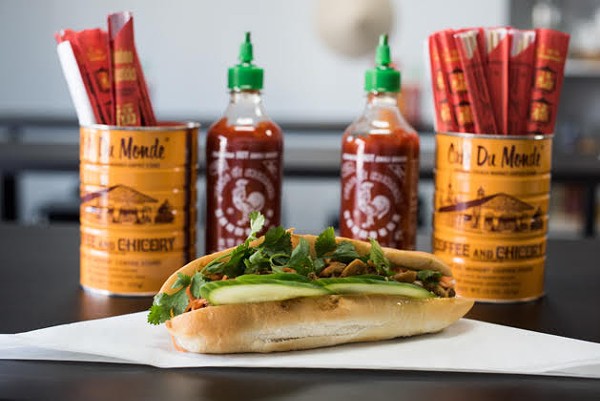 The Banh Mi Shop brings the feel and authenticity of Saigon's classic dishes.

0
0
Your Cart
Your cart is emptyReturn to Shop

*All orders will be ready within 15-20 mins of the order being submitted.